Interest in hydrogen fuel cells has risen tremendously in the last couple of years. Several countries have set ambitious targets for advancing hydrogen fuel. Korea, for example, is targeting 81,000 fuel cell electric vehicles (FCEVs) by 2022 and 2.9 million by 2040. In September 2019, 35 countries participating in the Second Hydrogen Energy Ministerial Meeting in Tokyo set a goal of having 10,000 hydrogen refueling stations and 10 million FCEVs by 2030. Additionally, hydrogen can find key applications in stationary power generation, industrial use, and the aviation and marine sectors.

Plug Power’s revenue primarily comes from its material handling segment, which sells fuel cells for use in forklifts. Material handling accounts for more than 90% of the company’s revenue. Plug Power is aiming to expand into FCEVs, back-up power, and green hydrogen and is already taking steps in this direction. It expects these new segments to contribute nearly one-third of its revenue by 2024.

Though the primary markets look different, there is a lot of overlap in Plug Power’s and Ballard Power’s markets. Ballard Power also supplies fuel cells for material handling applications, and Plug Power is its key customer in this segment. Both companies target the stationary back-up power segment.

Finally, the most important segment where both the companies currently operate is transportation. Plug Power is also focusing on the heavy-duty segment, Ballard Power’s key market. Ballard recently received several orders in this segment, including from Siemens Mobility to power a passenger train, Tata Motors to power 15 buses, New Flyer to power 20 buses, and Solaris Bus & Coach to power 13 buses. While this could mean increasing competition between Plug and Ballard, there are more worrying concerns relating to the two companies. What’s more, the bigger competition to both companies is from conventional energy sources and lithium-ion batteries.

Both Plug Power and Ballard Power Systems have managed to grow their revenue over the years. Moreover, the rate of growth has increased recently. 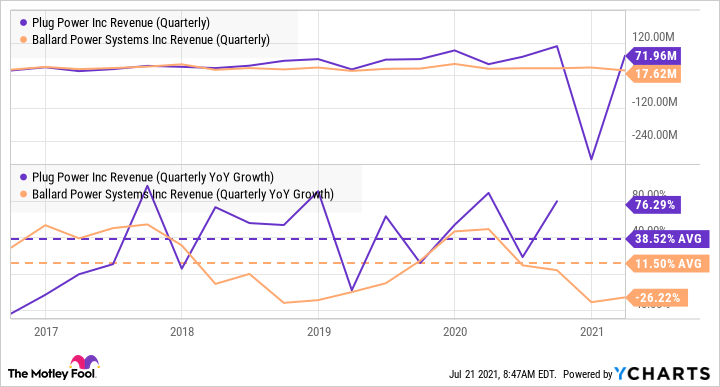 As the above graph shows, Plug Power’s revenue growth exceeded that of Ballard Power in the last couple of years. Plug Power’s negative revenue in the fourth quarter was due to the impacts of certain warrants. While the revenue growth looks impressive, the same isn’t true for the companies’ cash from operations and bottom-line profits. 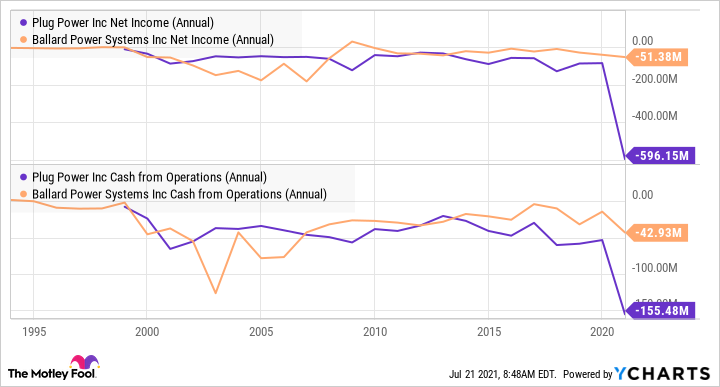 As the above graph shows, both Plug Power and Ballard Power have been incurring losses and burning cash for more than two decades. That makes one wonder how the companies have funded their operations for so long. 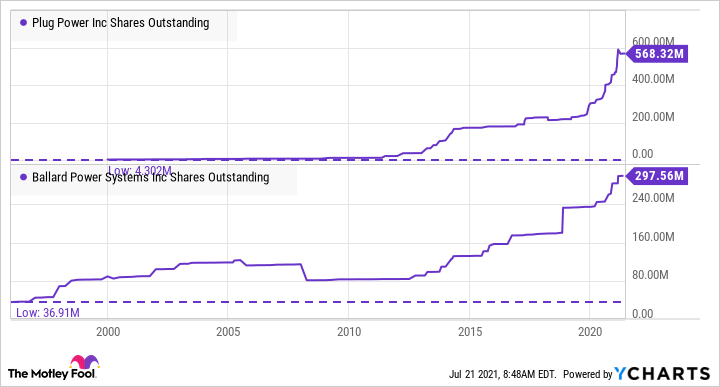 The above chart largely answers that question. Both companies have been issuing shares to raise funds. Plug Power’s outstanding shares rose from 4.3 million in 2000 to 568 million now. Similarly, Ballard Power’s outstanding shares have risen from 36.9 million to 297 million. While it takes time for new technologies to become commercially viable, considering the years already taken, investors might become impatient here. Then again, there are concerns relating to hydrogen fuel cells in general.

Why hydrogen hasn’t become popular as a fuel

Although hydrogen fuel is environmentally friendly, it faces certain limitations. Availability of cheap and improved lithium-ion batteries has significantly restricted the adoption of fuel cells. In 2020, only around 10,000 new FCEVs came on the roads globally, taking the total number of FCEVs in use to 35,000. That number was lower compared to around 12,350 new FCEVs that were added to global stock in 2019.

Though there is an interest in hydrogen as a fuel, much more needs to be done to meet the ambitious targets of increasing FCEVs set by various countries. In the absence of supportive actions by governments, hydrogen fuel cells will find use in niche segments at best.

Plug Power’s revenue is roughly four times that of Ballard Power’s. Moreover, it has been growing revenue at a much faster rate recently. Though Ballard Power has gotten a few orders recently, Plug Power has also entered several key partnerships to fuel its revenue growth. So, between the two, Plug Power looks better. Fuel cells are getting much interest in certain markets such as China, Europe, South Korea, and Japan.