Participate in Evolution Gaming’s own take on the much-loved game show Deal or No Deal! You’ll be experiencing 4 rounds of thrilling gameplay in a live studio setting.

Evolution Gaming put together their version of Deal or No Deal for casino players everywhere. It’s built just like the worldwide hit Danish game show it was inspired from! Head over and experience the show that took the world by storm.

The main objective is to predict whether the money inside your chosen briefcase will be higher than the banker’s offer. You don’t need to be a mathematician, an economist or statistician to win. You just have to have luck on your side!!

Brought to you by one of the best live casino gaming providers in the world today,  Evolution Gaming is known for its modern online casinos, boasting an impressive portfolio of live table games to choose from.

Live Deal or No Deal is also made with excellent gaming quality. Streamed from one of their dedicated state-of-the-art studios,  purposefully built to host their games, the action is handled by the best live dealers in the industry today.

How does the game work?

You’ll face off against a giant wheel with 3 rings. To qualify, you’ll need to match the golden sections of the ring in a line. Each spin triggered will cost you the amount of your bet. There is also an option where you can buy one or two rings to raise your chances of qualifying. 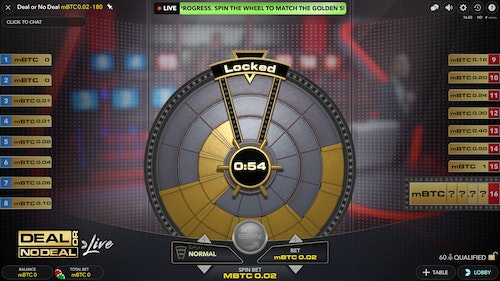 With every spin of the rings sets the take-home amount of the biggest-prized briefcase  75x up to 500x your bet. Placing a bigger wager will make the value of the briefcases bigger.

To see why this game is so enticing, let’s analyse it based on two perspectives—the bankers and the contestants.

In the banker’s case, he plays a large number of games that can greatly reduce the risks for him. This is the reason why he can tolerate the remaining risks and adopt a strategy that can minimise the expected value of the prizes that he concedes.

What the banker seeks to minimise is the prize you can win based on how long you played. A longer playing session is more advantageous for the banker. This explains why the first few offers the banker makes are only a small fraction of the expected value of the remaining cases.

The best bankers only make an offer that improves the value per the length of play from his perspective. This becomes a premium that the contestant must pay to end the game early.

Typically, when a contestant enters the game, they already have an idea of the minimum prize. A contestant will play as long as there are no significant risks of knocking down all the prizes above that minimum. However, what the contestant might consider a good payout can change as they play. Because of this, the contestant is unlikely to accept an earlier offer. 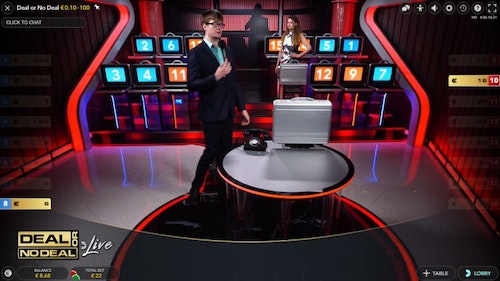 What are the best ways to win?

Evolution Gaming’s Live Deal or No Deal has an RTP of 95.42%. However, there are no straightforward techniques when playing this game. You don’t need any specific Deal or No Deal Live Casino strategies in your arsenal; you’ll only need luck.

There are two stages in the gameplay where you add money. Keep track of how much you are adding, so you can assess your total wagers against the offers you’ll be getting from the banker.

Substantial amounts wagered often yield equally substantial payouts. However, there is no guarantee that you’ll win a large amount at the end of the play. Only the banker’s offer is what you are guaranteed to win.

If the offer is twice the amount you’ve bet at any stage of the game, you should consider taking it. But if there are still a lot of briefcases remaining, stay in the game and you might just get a better offer.

You can also use the ‘Hit and Run’ strategy where you can quit right away if you reach your target winnings.

You’ll never be bored with Deal or No Deal

Here are some of the reasons why you would not regret playing this amazing game!

Evolution Gaming developed a fully immersive Deal or No Deal Live Casino game experience. You are both the audience and the player at the same time.

You will also get to watch the host react to the contents of the briefcases during the course of the game. But only you get to make crucial real-time decisions. The decisions you make will also directly influence the prizes available and what deals the banker will offer.

Just like the original game show, you’ll be getting calls from the banker, the host releases audible gasps and there is dramatic music with every briefcase reveal.

You may have watched the game show a few times and felt frustrated when a contestant skipped on the banker’s offer. This time, you’re the one that will get to experience the exhilaration brought by the game show first-hand.

It gives you a chance to play Deal or No Deal without leaving the comfort of your home.

Also, unlike the actual game show, you have an idea of what’s coming in as the numbers are displayed on the side of your screen.

#4. You don’t need to be a live casino expert

You don’t need to know how to double down, hit, or stand to be able to play. Live Deal or No Deal lets you enjoy real-time action of a live casino game without the technicalities of beating the dealer or the house.

This is made possible by the new generation of Live Games brought by Evolution Gaming like Dream Catcher and Monopoly Live. Instead of a dealer, you have a host whose job is to entertain you as he guides you through the game.

You’ll never be bored at Bitcasino.io

Experience this exciting game show from the comfort of your home. There are other games that you can play from Evolution Gaming that are available in Bitcasino’s library of awesome games.